Recently, I went to a nearby farm and to my surprise the ducks there were so damn aggressive. The owner, an old friend of mine, was petrified but wasn’t able to do anything. She asked for my help but I was clueless as well. Hence, I cleared my schedule, took out my phone, and decided to search all about this in order to write a decent post. Here is what I found out. Both male and female ducks bite. Male ducks, known as Drakes, bite more often than females. The bites can range from a slight pinch to a strong grab-and-pull.

Ducks do not have hands and therefore communicate mostly with their bills and hence the occasional biting. On the other hand, ducklings rarely bite unless they mistakenly think your hand is food.

There are many misconceptions about duck behavior and not understanding all the complexities can create problems. Therefore, read this article entirely to understand everything in detail.

Contents show
1 Why do ducks bite?
2 Do ducks have teeth to bite?
3 Do duck bites hurt?
4 Can you get infections from a duck?
5 Are ducks aggressive all the time?
6 Can ducks attack other animals, especially chickens?
7 How to make a duck stop biting you?
8 How to tell if a duck likes you?
9 How to tame a duck? How to make ducks like you?
10 Related Questions
10.1 Why do ducks hiss at you?
10.2 What does it mean when a duck wags its tail at you?
10.3 Drakes have attacked our children. What to do?
10.4 New ducklings have started to bite/peck at me. Is there a reason?
10.5 When I hug my duck, they move their necks over my arm and shake a bit. What does that mean?
10.6 Can female ducks be aggressive as well?
10.7 How to tame a wild duck?

Why do ducks bite?

Ducks bite for a variety of reasons including biting in anger, to show dominance, to show their love, to ask for food, etc . But remember, not all bites are the same.

Ducks sometimes nibble to show affection and even to “beg” for food. If the biting is severe and uncontrollable, it could be because of two reasons. The first is that they are protecting their partner and her eggs from a big predator like you.

Secondly, sometimes, as they live with humans for a long time, they may start understanding you as a potential partner. And hence, just like with other ducks during the mating ritual, they bite to make initiations and convey their readiness.

Do ducks have teeth to bite?

Like most other birds, ducks do not have teeth. [1] They have serrated bills with shapes similar to sawblades. Their bills look and work as teeth though. These bills are serrated to catch and grab underwater plantations. Duck bites can hurt. It can vary from slight pinch to strong grab-and-pull, which could result in bruises. You can relate to it by grabbing a plier and gently pressing it, so it starts hurting a little. That’s how you feel when a duck holds/bites you with his bill.

It will hurt more if your skin is caught under their serrated bills and you try to force remove it as their hooks are inside your skin.

Can you get infections from a duck?

You can get infections from ducks. According to a CDC report, in 2016, over 890 people were infected by birds, including ducks, due to proximity to them. In case a duck bites you, you could get Salmonella.

The symptoms can range from vomiting, diarrhea, abdominal cramps, and even fever. If you are concerned about anything, immediately consult a physician regarding your situation. [2]

Redness, swelling in the area can all signs of infection. [3]

Are ducks aggressive all the time? 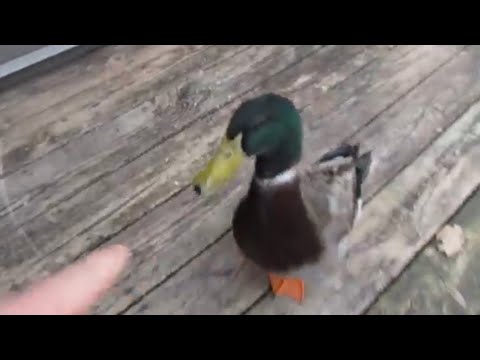 Not all ducks are aggressive. It depends a lot on the individual duck’s personality than the species of the duck.

As drakes reach mating age and especially if it is the mating season, they can show aggressiveness.

Aggression is also a sign of loneliness. If you have too many drakes and not many females, then drakes can fight within themselves for the few females out there. The proper ratio should be at least 3 to 4 ducks for one drake. 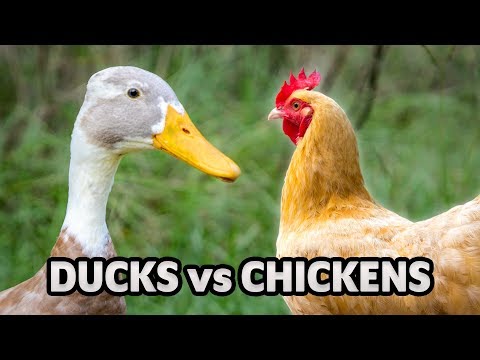 Ducks can definitely attack chickens if they are in their vicinity. This is especially normal if drakes do not have other females to mate with.

To avoid such situations, keep the ducks and chickens apart if you see aggressive behavior. You can also reduce the number of drakes to a minimum.

How to make a duck stop biting you?

Ducks can be aggressive at times and can bite you hard, including causing injuries. They do this to show their dominance, and you have to establish your dominance.

To do this, you have to put the duck down and gently sit over him while keeping both of his flaps immovable for at least 5 mins. Be gentle but firm.

Continuously doing this will definitely send the message to the duck that you are in no mood to mess with. And you are the boss here. Check the example below to see how it should be done. 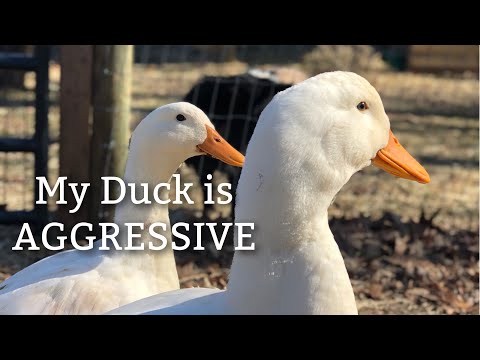 There are other ways, as well. You can pick them by their bills and carry them around a while not allowing them to move a bit. You need to show some aggressive drake behavior. Treat them like other aggressive drakes do. You have to show that you are the biggest, baddest drake out there.

Don’t feed them by your hands while you are showing aggressive behavior. Don’t pet them. Wear long shoes and long pants, so they have nowhere to peck.

You can push them whenever they try to come close to you.

You can also carry a small stick, and that should send a signal that you are in a serious mood.

How to tell if a duck likes you? There are not a ton of ways to show whether a duck likes you are not. Ducks are prey-animals, and therefore they sometimes do not show enough affection to their human carers.

However, some ducks do. If the duck likes you, he or she would come and stand in front of you when you come from outside. They then will quack and talk up a little bit. They will also gently nibble at your hands.

Friendly ducks also allow you to pet them and hold them.

How to tame a duck? How to make ducks like you? It is much easier to make ducks like you if you have cared for them since birth.

If not, there are still other ways around it.

Here are the steps to tame a duck:

Why do ducks hiss at you?

Hissing in ducks has several meanings. Some say it shows aggression, while others say it is normal for them to do so. It can mean both in my view. In the case of aggression, you would see hissing with flapping wings and other aggressive activities. Besides that, hissing can also show that the duck is defensive and is trying to defend themselves or their eggs.

What does it mean when a duck wags its tail at you?

Wagging the tail is a sign of happiness in ducks. Usually, ducks wag their tail when you are there to provide them with something to eat. When they anticipate good things coming their way like dogs, they do this behavior.

Drakes have attacked our children. What to do?

Drakes can be aggressive sometimes, and therefore at those times, it is not a good idea to allow children near them. Make a fence so children can view them, but they can’t hurt them at all.

New ducklings have started to bite/peck at me. Is there a reason?

Ducklings are rarely aggressive, but when they are, look at this from their point of view. They are small and prey animals. When a large hand comes towards them, they get frightened and use their defense mechanisms. You have to understand their fears and be a lot slower from thereon.

However, not all pecks are the same. They may also be asking for food.

When I hug my duck, they move their necks over my arm and shake a bit. What does that mean?

That means that the duck is showing you who’s the boss here. They are trying to exert their dominance.

Can female ducks be aggressive as well?

Female ducks can be aggressive at brooding time or when they want to show the other ladies in the pecking order who’s in charge here.

How to tame a wild duck?

Keeping a wild duck species is against the law. You should send it to a rescue center ASAP.

Who doesn't love some weird interesting duck facts? So, let’s get on with it! Are ducks birds? Ducks are birds. They come under the genus Anatidae of the bird species. They are similar to...