A lot of my friends have ferrets. But, some of them are quite disturbed by their unusual behaviors like making random noises which they don’t understand. Ferrets have also disturbed one of my colleague’s sleep. To find a solution, they asked me about it, but I also was not sure. So, I decided to research all about the subject and write it on my blog. Here is what I found out. Ferrets do make noises and even weird ones.[1] These noises can range from dooking, hissing, barking to whining, and crying.

Ferrets make these noises due to reasons varying from happiness, excitement, anger to even illness.

Fuzzy parents sometimes are unable to understand signals and make wrong decisions. Therefore, it is necessary to understand these signals in detail. Keep reading to know more.

Contents show
1 What noises do ferrets make?
1.1 Ferret dooking
1.2 Ferrets screeching
1.3 Ferret barking
1.4 Ferret hissing
1.5 Ferret whining
1.6 Ferret sneezing
1.7 Ferret snoring
1.8 Ferret teeth grinding
2 Why do ferrets make noises?
3 Are ferrets loud at night?
4 How to stop the ferret from bothering you
4.1 1. Resolve the problematic issues
4.2 2. Keep them in a different rooms
4.3 3. Provide ample playtime
4.4 4. Don’t reinforce bad behaviors.
4.5 5. Remove toys if your ferret plays at night.
4.6 6. Stop their digging
4.7 7. Create a schedule
5 Do ferrets scream?
6 Related questions
6.1 What does it mean when ferrets lick you?
6.2 Can ferrets learn their name?

What noises do ferrets make?

Ferrets make a lot of noise of different kinds.[2] We are going to discuss them one by one.

Ferrets noises can include:

Lets have a look at a few important ones. 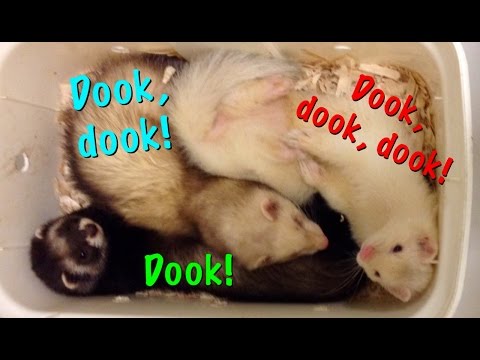 Dooking is a happy sound for ferrets (sometimes referred to as chucking and even clucking). It sounds close to “he hees.”

They make it when they are excited about something like a new smell or excited from wrestling another ferret or from any new thing that they like.

Ferret mothers (Jills) also make a similar sound to this, but it is only to help out their kits when required. 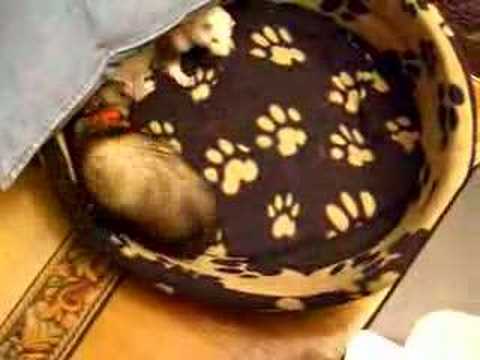 Screeching noises are signs of fright and anger in ferrets. These are usually very high pitched and also accompanied by sounds of constant chattering et cetera.

Screeching signals that the ferret is in some kind of trouble and is experiencing fear or anger.

This is your cue to help your ferret out. She may have got stuck in a hole, something might have stuck in her feet, or a large angry dog may be in front of her.

Frightened animals can be nasty sometimes, so whenever you go out to help your ferret, understand that they can bite or attack you due to natural reflexes. Be cautious in these situations. 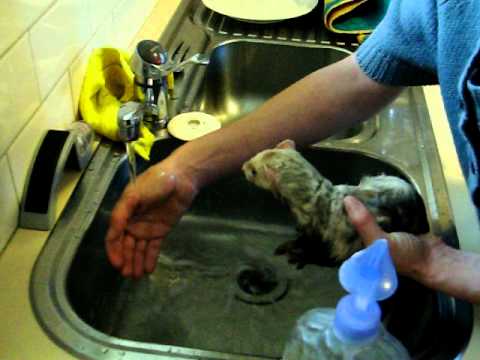 Ferret barking is a sign that the ferret is either highly excited or frightened. They can also bark when they are quite annoyed.

For example, they may bark if you were taking away their favorite food placed in front of them. The ferret barking resembles 2 to 3 loud chirps at the same time.

If the ferret is continuously barking, don’t forget to check her out. There could be a serious problem. 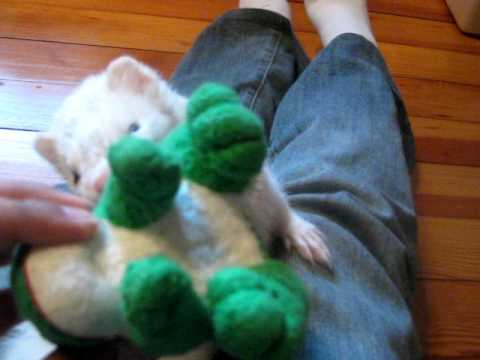 Ferret hissing a sign of annoyance and even anger. It is a warning that your ferret doesn’t like this at all.

The hissing can continue for long or be of short spats, according to the situation. Make sure to handle your fuzzy with caution during these times. They can lash out at you. 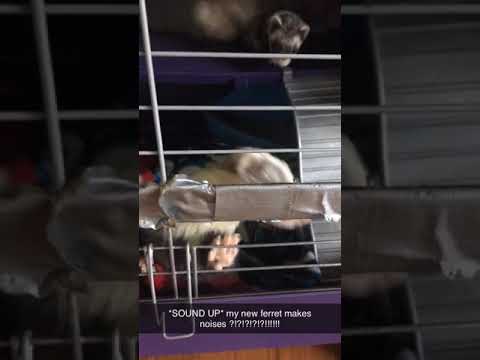 Ferret whining or a low-intensity crying can both be because of attention-grabbing behavior or due to actual pain.

You should check them out and ascertain the reason before devising a solution. 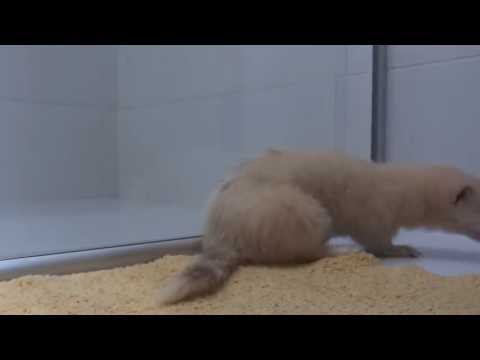 Ferrets can sneeze like humans when there is something in their nostrils, which is completely normal behavior.

However, if they are snorting continuously and something is coming out of their nose, you should pay attention. 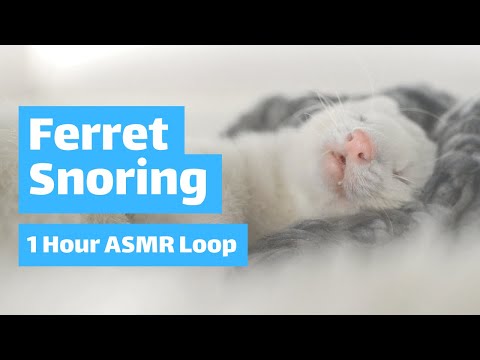 Snoring is a typical ferret behavior and should not be a problem unless they sleep with you (which is not a good idea).

A lot of ferrets snore during the night. 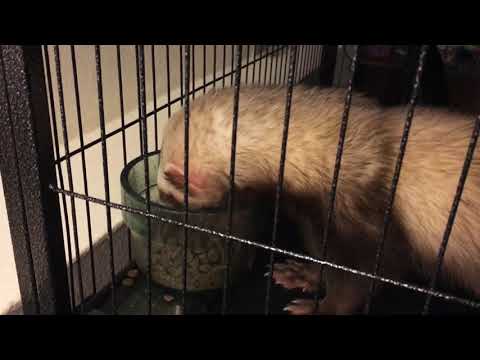 Teeth grinding ferrets is a sign of pain. Ferrets grind their teeth whenever they feel extreme pain, and therefore, you should immediately check out why your ferret is doing so.

It could be an external injury, but it could also be an internal problem like a tumor or something else.

If the grinding is accompanied by lethargic behavior, dullness in eyes, et cetera, it is a sign of illness.

Contact your vet immediately if these signs continue for a long.

Why do ferrets make noises?

Ferrets are very expressive animals. They express themselves in various ways but making noises is not their priority.

They usually communicate through body language, but when the situation requires more than their expressions, they make noises.

Are ferrets loud at night?

Ferrets are crepuscular animals. That is, these fuzzy creatures are most active during the dawn and the dusk. Ferrets love to play with their water and can splash around, making a lot of noise.

Sometimes, these sounds can wake you up early and even in the middle of the night. So, you need to understand how to cope with them.

How to stop the ferret from bothering you

There are several ways through which you can stop the ferret from bothering you. Let’s talk to them one by one.

If the ferret is bothering you because there is a specific issue like getting in trouble with something in their cage or the vicinity, you can resolve that. Ferrets can also make noises when they are suffering from an illness, so you can visit a vet if such situations happen.

2. Keep them in a different rooms

This is critical. Ferrets are quite active early morning and may disturb your sleep if you are not a morning riser. Therefore keeping them in a different room with a proper light schedule would be a great idea.

Ferrets need at least 14 hours of darkness, according to conditions used in a study. So, provide them either with a very dim light in their surroundings or provide them places/toys/beds where they can hide and sleep in the dark. When ferrets are awake, you need to provide them at least 2 to 4 hours of playtime so that they are worn out and can sleep easily. Ferrets who aren’t given playtime can wake you up at night.

You need to tire them out during the day, whether it is by providing them an outlet to dig or chasing them for some time, but that is a necessity.

Some ferrets are attention grabbers. These carpet sharks love to get our attention by making noises. So, whenever they try to disturb you at night, do not give them any attention or pick them up. However, if the noise continues after 10-15 minutes, you can go out and check whether everything is all right.

5. Remove toys if your ferret plays at night.

Some ferrets like to play very early in the morning and can create problems for you. They may also not sleep because they have their favorite toys nearby, which they enjoy a lot. So, you can separate the toys from their sleeping area to avoid such situations.

The only things that remain near them while they sleep should be food, water, litter, and sleeping beds.

Ferrets are natural diggers and can disturb you during the night by playing with the bowl water. There are two solutions here – 1) remove the water bowl with a bottle. 2) give them an outlet to dig in the day, so they don’t have to do it during the night.

For the digging outlet, you can use a normal plastic container like this one and lots of rice/sand.

By creating a schedule of playtime, lighting, and various other things, you are making them follow a particular routine. In this way, they are likely to wake up when you want them to wake up. Ferrets usually sleep when their human parents sleep. So, it is a good idea to make your sleeping time congruent with them.

You can also put a sheet over their cage to simulate the night time.

Ferrets can scream when they are in pain. This usually occurs when another ferret is trying to bite them or when they have something in their toes. For young ferrets, who wants out of their cage, this could also be a sign of cage raging.

The cage raging will continue for some time until you stop giving them attention. It could also be occurring because they are not getting enough playtime outside every day.

What does it mean when ferrets lick you?

Licking is quite ordinary for ferrets. They lick to groom you like they groom their other ferret cohabitants. It can be a sign that they like you. Some users on forums have also reported that the licking is higher when you taste salty due to the sweat.

Can ferrets learn their name?

Ferrets can learn their name but not in the way you think they’ll do. Ferrets are very attentive creatures, but they don’t understand your language.

However, they understand the tone and pitch of sounds. So, if you train a ferret properly, she will understand her name and come out when you call her.

Continue Reading
link to Why Do Ferrets Sleep So Much? A Guide to Ferret Sleep!

Every ferret owner is concerned about their cute fuzzies not getting enough sleep, but how much sleep is enough? How much should they sleep? What to do if they don't sleep? What if they are sleeping...