Duck pooping is a headache for a lot of owners. And, many are quite worried about it. In fact, it is one of the most cited reasons for not adopting a duck. This is also quite problematic when you do not have an outer space to hold these cute birds. Hence, I decided to research a bit on the subject to gain some knowledge and help my viewers. This is what I found out. Do ducks poop a lot?

Ducks do poop a lot. They just poop everywhere. An average male duck poops every 15 to 30 minutes. The ducklings, however, poop more often than that. A duckling can poop every 10 minutes.

But, it all depends on how much you feed them and when.

A loving, caring duck parent keeps a regular check on his/her duck’s health. If you want to be that parent, keep reading on!

How much do ducks poop? Ducks are known to be messy creatures. If you have an indoor duck, you are likely to see poo everywhere in your house. And, when the poop dries out, it will get even further through his feet.

if duck poop keeps rubbing in your feet, it could lead to infections like Psittacosis. [1]

So, you get the idea.

Why do ducks poop so much?

Ducks, like many other birds, have a fast metabolism. They excrete a large number of organic products after eating them. Hence, they poop so much. [2]

They even are worse than chickens in pooping.

Do ducks poop more than chickens? Ducks definitely poop more than chickens. In fact, many owners have reported that they poop 3 to 4 times more than an average chicken.

Duck poop is also quite smelly and watery compared to poop from chickens. It also takes more time to decompose, according to some in forums.

What can you do about it?

Most owners who own indoor ducks, use diapers as a way to control the poop. Still, there are occasions when it falls out, and you have to clean up.

Cleaning is a daily process if you have ducks. Also, diaper training has to be done from the time ducks were quite young. An adult would not take a new thing on his body lightly.

Also, duck diapers are pricey. A single diaper can cost you a pretty penny as you can see here.

It doesn’t matter whether they are inside or outside; you have to clean their brooders every single day. As said before, they make a mess out of it.

You should keep your ducks outside to better deal with the poop and the smell that comes with it. You can add ingredients like hay, so it may soak their poop for a while before you change it.

It is recommended that you change the hay every three days.

In order to keep the cleaning to a minimum, keep the water and food mounted instead of just being on the ground. This will ensure that they do not miss them a lot.

Also, please do not allow them constant access to water in the pens, only outside. Ducks have a habit of fouling the water regularly, and you have to keep changing to keep them healthy.

Pooping situation quite similar in ducklings as well, where you have to change the pine shavings twice a day. Wood shavings from tractor supplies should be fine for this use. 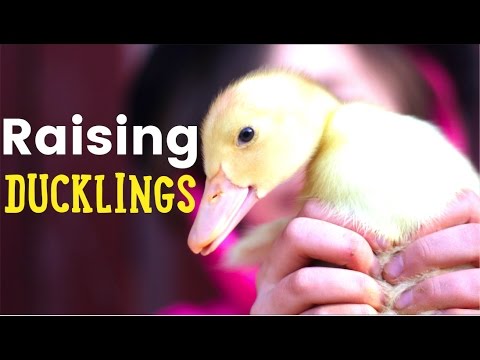 How to clean the duckling tubs

Ducklings can get their surroundings messy quickly. If the tubs remain filled with pee and poop for a long time, there are chances of infections and diseases, and hence you should clean them.

After doing so much work, you must be wondering why can’t you just potty-train them? After all, a lot of pets can be potty trained.

Why ducks cannot be potty trained Ducks are not like other pets. They can’t be trained to do things, at least the things we want.

Yeah, you can lure them with treats (maybe to come out of their shed?) but not more than that.

Furthermore, ducks do not have the same excretion system as we have. Ducks are birds, and birds do not have anuses. They have one hole for everything – peeing, pooping, and putting out eggs – known as the cloaca.

Their sphincter muscle is not powerful enough to hold the poop for a long time. Due to evolutionary reasons, this is quite good for them. Carrying extra weight would not be a good idea when flying.

The muscle can hold for a little bit as they never poop in their nest or on their eggs. This does show they can hold a bit. [3]

But, some users have reported that after extensive noticing, they were able to potty-train their ducks to an extent.

One user who noticed that his duck used to wag his tail just before he went to poop, trained him to do so in the right areas. This is what we are going to use in our potty training guide.

How to potty train a duck

There are several steps through which you can potty train your ducks. But, this is not perfect, and it’s a hit and miss. Is there any loss in trying?

Step 1: it is preferred that your duck lives outside, but even if he is indoors, this can work. Attach a camera near their pen or brooder and record all their activities for 2 to 3 days. Make sure the camera is placed in such a way that they are mostly never out of sight.

Step 2: fast forward the recordings and only slow down when you see the duck poop. Now, slowly rewind 2 to 3 minutes before the duck started pooping. Observe the behavior and see signs that could point to pooping like them wagging their tail or something similar to that.

Every duck is different, so we cannot have one stick for all, and hence you have to observe the behavior to find out.

Step 3: now, as you have pinpointed the behavior, also take note of the time they take to poop after feeding. This will help you in guiding them to the right place at the right time.

Step 4: now, for the next several days, you are going to put them in the right areas whenever you see the signs of them expecting poop.

Step 5: make sure that the area or the place is very near to their pen or brooder. Ducks cannot hold for long (2-3 seconds at best), and hence asking them to poop in distinct areas is too much.

But, there is a lot more to know about duck poop. Let’s talk about some worrying poop problems.

Consistency like loose or hardy can be affected by the amount of water and salt duck’s been eating those days. Watery foods will make poop watery while grains and dairy will result in harder poops. Several owners are concerned not only about the pooping but also about the color of the poop. Hence we have some explanation for the issues. These are not scientifically tested but based on anecdotal assertions.

Duck poop is green when they are eating greeny stuff like peas etc. If the poop matches the food, then everything is fine.

Dark metallic poop is not normal. You should consult a vet.

Black gooey poop can mean bacteria such as Enterobacter.

Watery poop can either mean that they are drinking a lot of water or could be a sign of diarrhea.

Very dark poop could be a sign of health problems.

Bright green poop points fingers to liver issues but could also be a sign of a hen that’s just hatched.

Red poop can come when they are eating red veggies like watermelon or tomatoes.

Yellow poop usually is a result of eating yellow duck feed or veggies. It could in very rare occasions mean hepatitis

Cantaloupe can be the reason for your duck’s orange poop.

Foamy poop can be a sign of the cocci bacteria.

This could be due to the hen’s brooding time.

It is hard to determine whether the poop contains blood or not. Place it on a clean white paper and if you determine that’s blood, there could be some reasons to it.

It can either be damage to intestinal linings which is normal sometimes or could be a result of a bacteria like cocci.

Consult a vet is the best you can do.

A lot of the issues in poop can occur due to vitamin and mineral deficiencies. Hence, providing a probiotic supplement is an excellent idea.

It would also be a good idea to de-worm your ducks every 4-6 months with deworming solutions like these.

Q: What to do with the duck poop?

Duck poop is a pretty good fertilizer. You can use it in your plants or give it to someone nearby who loves gardening.

Q: Is it a good idea to keep a duck alone?

Keeping a duck alone is not recommended. Either buy two females and one male or one female-one male combination. Ducks need affection and bonding. They will get depressed alone.

Q: is duck poop harmful to other pets?

Yes, duck poop can infect other pets like dogs and even rabbits. You should not keep ducks in the same areas as other pets who love to eat feces.

Who doesn't love some weird interesting duck facts? So, let’s get on with it! Are ducks birds? Ducks are birds. They come under the genus Anatidae of the bird species. They are similar to...