Every ferret owner is concerned about their cute fuzzies not getting enough sleep, but how much sleep is enough? How much should they sleep? What to do if they don’t sleep? What if they are sleeping too much? What about the place? Questions like these are often thrown around on forums. So, I thought— why not to research them out and write an article about them? Here is what I found out. Why do ferrets sleep so much?

Ferrets sleep so much because they are small animals with high brain metabolism. And according to sleep.com [1], such animals sleep more as they require more high bursts of energy in a short span of time.

But that just a summary. A lot of us have misconceptions, and some even leave ferrets to sleep on their own time. That’s a bad idea. Keep reading on to know why!

Do ferrets sleep at night? Ferrets do sleep at night. As they are crepuscular, they are mostly active at dawn and dusk. [2] They may wake up quite early and disturb your day, though.

Read more: How to stop ferret from disturbing you at night.

How many hours a day do ferrets sleep?

Ferrets sleep close to 16-18 hours [3], and good quality sleep is vital to their health. Ferrets can sleep a lot more in winter, close to 20 hours.

If you are too worried about your ferret sleeping extra hours, look for other signs like abnormal poops, hair loss, reduction in appetite, or even teeth grinding.

Mostly, if their poop and appetite are fine, then there shouldn’t be a reason for worry.

We have written a detailed article on abnormal poops here. Do check it out. 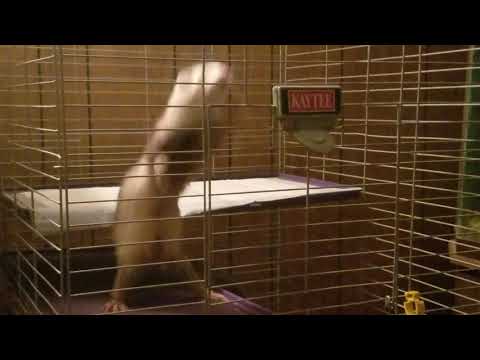 Ferrets can sometimes exhibit cage raging whereby they will rattle the bars or bite them. Throw stuff around or mess up the bedding. They want you to let them out.

Ferrets are highly energetic animals, and they can’t stay in the cage for long. They want to express their energy.

Stress can be a significant concern for many animals. And it can sometimes lead to diseases like ulcers. Therefore, try to reduce their stress by letting them out as much as you can. You can keep the cage door open so they can go back to sleep when they want to.

Always answering their cage raging is not a good idea either. That will reinforce the behavior in their mind, and they will do it more.

How to make ferrets sleep at night?

It is difficult for new ferrets to adjust to a new environment and, therefore, face difficulty sleeping. Let’s learn about a few ways you can use to make them sleep on time.

All ferrets will take time to adjust to new environments and habits. This is especially true for older ferrets. Give them some time to learn and adapt.

Should I cover my ferret’s cage at night?

You should cover your ferret’s cage at night. Ferrets are wild animals, and their natural clocks work with daylight. But, if they continuously see the light, their body won’t understand and keep up with a healthy sleeping schedule.

Ferrets sleep everywhere, from the bathroom floor to the shoe rack. They can sleep in every nook and corner of your house: they can sleep under the carpet, inside an amazon box, just about anywhere. They like to sleep in dark and closed spaces.

Can I let my ferret sleep with me?

You can let your ferret sleep with you, but that’s neither recommended nor safe. Ferrets are small animals, and you can seriously harm them with your body movements. Ferrets also have a different schedule than humans, and you can disturb their sleep patterns by letting them sleep outside their cages.

You should instead let them fall asleep near you and then put them back in their cage.

If you want them to sleep with you, put your old socks/shirts (something with your smell) near your feet, so they find a safe place to sleep near you.

But be prepared for scratches and bites if they are sleeping near you.

How to make ferrets sleep near you?

Ferrets are not as cuddly or sleepy as seen sometimes on IG/YT videos. Most ferrets won’t sleep near you all the time. They like their areas, and they sleep there when they want.

But, some exercises like this one can help a lot. (see video above)

You can condition/train a ferret to sleep with you. What you need to do is when they are sleeping, hold them up, and put them onto your chest. Initially, they would find it disturbing when they wake up and see a very different environment than what they went to sleep with. But slowly, they will adopt and will immediately sleep after waking up. They will now feel comfortable with the new environment.

This could be dangerous in some scenarios as you are undoing their cage-sleep associate. 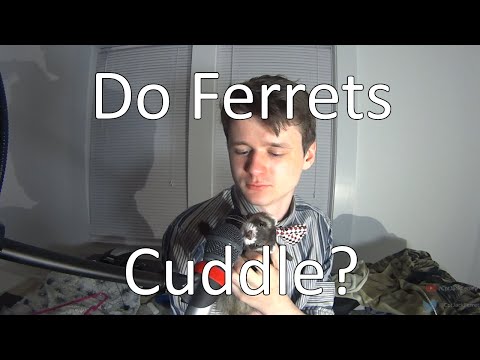 Young ferrets are less likely to cuddle with you unless they get slightly older (5yrs or more). Some 1-2-year ferrets might allow you to cuddle with them as it also depends on personalities. And, these personalities generally become mellower with age.

Why do ferrets dead sleep? 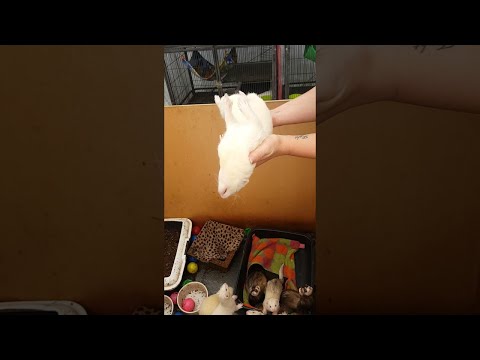 Dead/deep sleep is normal for domesticated ferrets. Why they do, this is not known yet. Deep sleep occurs in many animals, including dolphins, where it is called “logging.” If they do this occasionally, then it is fine, but if it is continuous, it could be a sign of hypothermia.[4]

The dead sleep should not last more than a few minutes. You can calmly call them to get them out of deep sleep.

How to get a ferret out of dead sleep? 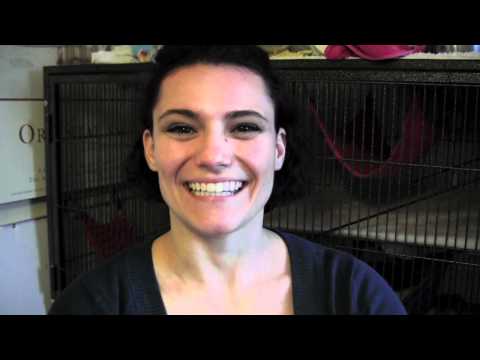 New ferret owners sometimes freak out when they see the SND or dead sleep thing. They think that their ferret has died or something has happened to her, but that’s not the case. Deep sleep is quite normal for ferrets.

In SND, it looks like they are in a coma. They don’t even wake up when you call them.

So, how to get a ferret out of dead sleep/deep sleep/SND?

There are some techniques available: –

If they look at you with one eye open and then go back to sleep, everything is okay. IF it persists for long, then you need to visit a vet. It can take up to 1-2 minutes for them to fully wake up, so be patient.

Deep sleeping alone should not be a big problem, but if it is combined with a change in sleep patterns and appetite differences, you should notice.

Why do ferrets scream at night?

Ferrets can sometimes scream at night. The screams are short and loud. Some call them “dream screams.” However, they could also be suffering from seizures as a result of insulinoma. You need to take them to the vet and check out their blood glucose (bg) immediately if this continuous.

An example of a ferret suffering from tumors 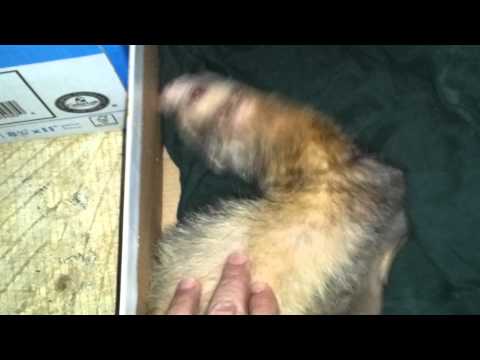 Why do ferrets shake/twitch while sleeping?

Twitching and shaking are normal in ferrets as when ferrets sleep, their body temperature goes down. So to shore it up, they twitch and shake. Make sure the temperature they are sleeping in is not too cold. It could also be a reaction to a dream filled with fear or, in extreme cases, due to a result of a tumor.

Is free-roaming good for ferret’s sleep? 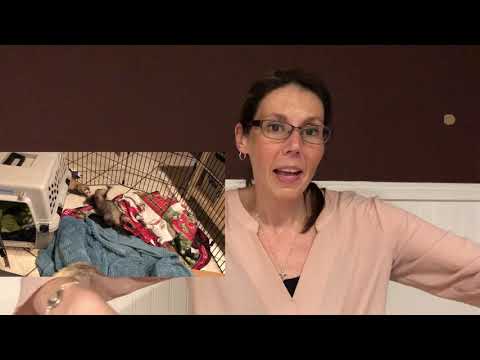 Free-roaming would not be a good idea if you want them to have full sleep time. They will sleep any time they want and wake up at slight sounds, willing to play again.

You can have litter problems as well if your ferrets are prone to free-roaming. They can sleep at night if you have played a lot with them before sleep. Make sure to provide some beddings in a sleeping area of their choice, like a closet or any other enclosed place.

There is little to worry about when you have substantial ferret proofing done in your house. They likely won’t get hurt or something like that.

If the proofing is mellow, they can get their claws stuck in carpets and stuff and call you out during nighttime. But, you have to be prepared for that if you want to leave them to their own.

Can you pet a sleeping ferret?

You can pet a ferret in their sleep but their waking up depends on their personality. Some will immediately wake up, but others will just keep sleeping.

How much time should you provide them to play?

Different ferrets roam at different times. Some might want to get out more often than others. Usually, you should let them out for 4-5 hours in 2-3 instances. Let them play for 1 or 1.5 hours, and then get them back in.

Free-roaming ferrets require more time to play than caged ones. Hence just 4 hours for them is not enough. They can get lazy in winter, though.

You can let them out in the morning and evening and let them play 2-3 hrs each time.

Ferret not coming out of the cage?

Ferrets start to understand their cages as their safe zones. They are prey animals, some large birds like hawks, so they have to be careful when roaming out anywhere. If they see a spot on the ceiling, they might mistake it for a hawk. Anything can trigger their natural preserving instincts, and you’ll have to figure out what it is that’s freaking them out.

If they have severe problems coming out, you can create a ferret trap to help them out.

Continue Reading
link to Why Do Ferrets Stink? A Guide to Dealing with Ferret Smells!

Many new ferret owners feel stigmatized by the awful smells they face once they get their fuzzies home. They try a lot of things, and nothing works, which eventually ends badly for the ferret. To...